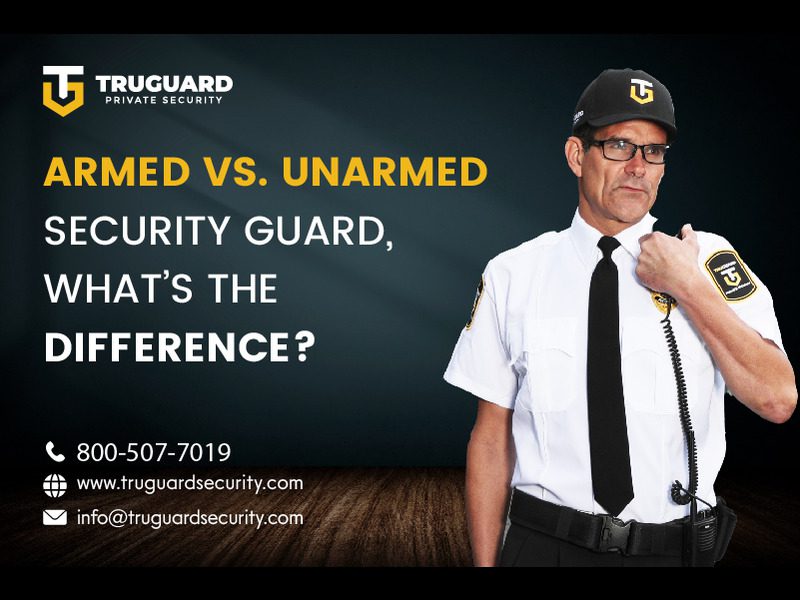 The last thing a company owner wants is criminality to obstruct their success. A workable strategy ensuring the safety of you, your team, and your clients is crucial. It would help if you had a custom solution to reduce crime in your office, whether that involves network access, monitoring, de-escalation, or illegal access detection.

Since safety concerns are on so many people’s minds, it’s crucial to comprehend how to effectively defend your company and your clients using various security guards. When hiring a guard, many additional factors exist, including the distinctions between armed and unarmed security guards

What is The Difference Between Armed and Unarmed Security Guards?

Armed security guards include one or more qualified guards who have undergone safe firearm handling and carrying training. They provide defense and protection tailored to your needs and can employ lethal force when necessary. Businesses with precious goods and services include banks and jewelry shops. Customers of a company feel secure and at ease thanks to armed guards. However, it might cause anxiety if individuals think they are there needlessly. These scenarios fit an unarmed guard better.

The responsibilities of an unarmed security guard are less demanding than those of an armed guard, and they do not carry a weapon. They frequently have tasers, pepper spray, or batons—non-lethal weapons.

While having no security at all would also be unsettling, unarmed guards are preferable for situations where having an armed guard would be. In some instances, their mere existence will typically serve as a deterrent to criminality. Unarmed guards can do multiple tasks in addition to keeping people safe, like escorting people to their vehicles after dark, giving instructions, keeping people out of prohibited areas, or working at a front desk.

What To Consider Before Choosing The Right Type of Security Guards?

Numerous elements exist when deciding whether to hire armed or unarmed security guards. In the end, all of these aspects depend on your organization.

1) How Dangerous Is Your Company?

Employing an armed security guard instead of an unarmed guard may or may not be necessary, depending on certain features of your organization. Here are a few things to think about:

2) What Kind of Company Do You Run?

There are many different situations when firms recruit security guards. Security officers are typically present in places like hospitals and retail establishments. In 2017, firms filled over 1 million security posts in the United States, and 55,000 more are likely to be created over the following years.

Since having this kind of security is so prevalent, you probably won’t have to worry about if employing a security guard would make your customers uncomfortable. Instead, the issue is whether the guard must be armed. But bear in mind that it all depends on the type of company you run. An armed security guard will only scare customers if your store sells expensive goods. A similar perception will apply to other companies like banks, hospitals, schools, or churches.

Armed security officers are costlier to employ than unarmed ones. The armed guard must undergo much more learning and development because they carry a lethal weapon, which necessitates getting their rewards. They are probably in a more dangerous scenario than an unarmed guard, which justifies being paid more. In this situation, you would also require liability insurance to safeguard your company.

On the other hand, since they need less instruction and liability insurance, unarmed guards are less expensive to recruit. An unarmed security guard’s tasks and responsibilities are less demanding since they have less schooling.

Private security guard company TruGuard Security is located in California and has been at the forefront of the market since 2010. We provide specialized security services to protect people, property, and treasures throughout California. We take pleasure in supplying our customers with competent, top-notch armed and unarmed security guard personnel and highly qualified account managers supported by a top-notch Dispatch Center around the clock.

We have been delivering comprehensive security guard services dedicated to providing the solutions required to protect the safety of your communities,  important assets, employees, staff, family and more.

TruGuard Security operates 24 hours a day 7 days a week. Contact us today for an immediate response.